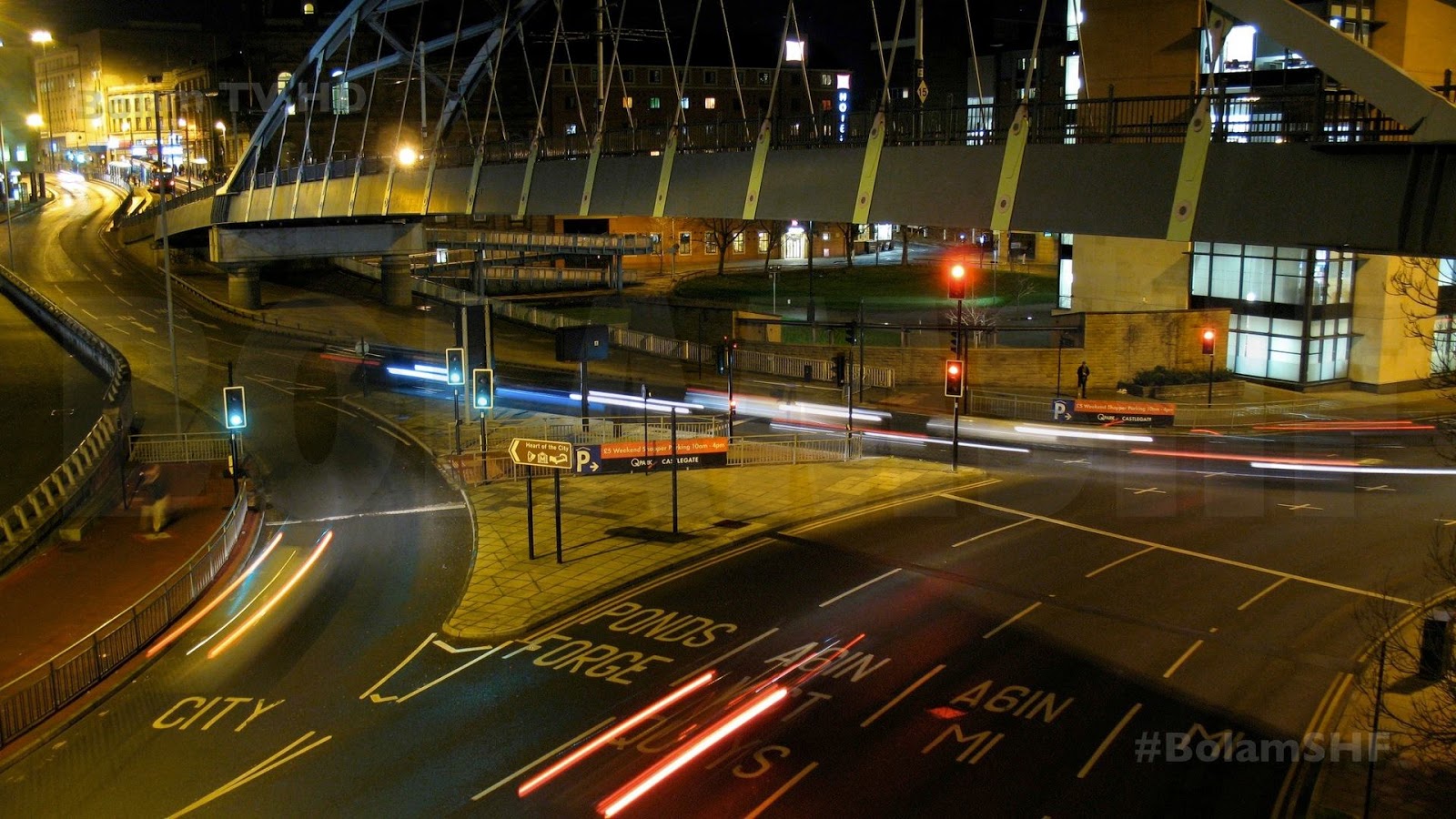 As I write this post fellow walker around Sheffield city, Richard Bolam, is in the middle of his residency in DINA the new Sheffield arts venue with his project 'IN THE PIPE (Phase I) - video installation & mini-residency at DINA by Richard Bolam'. 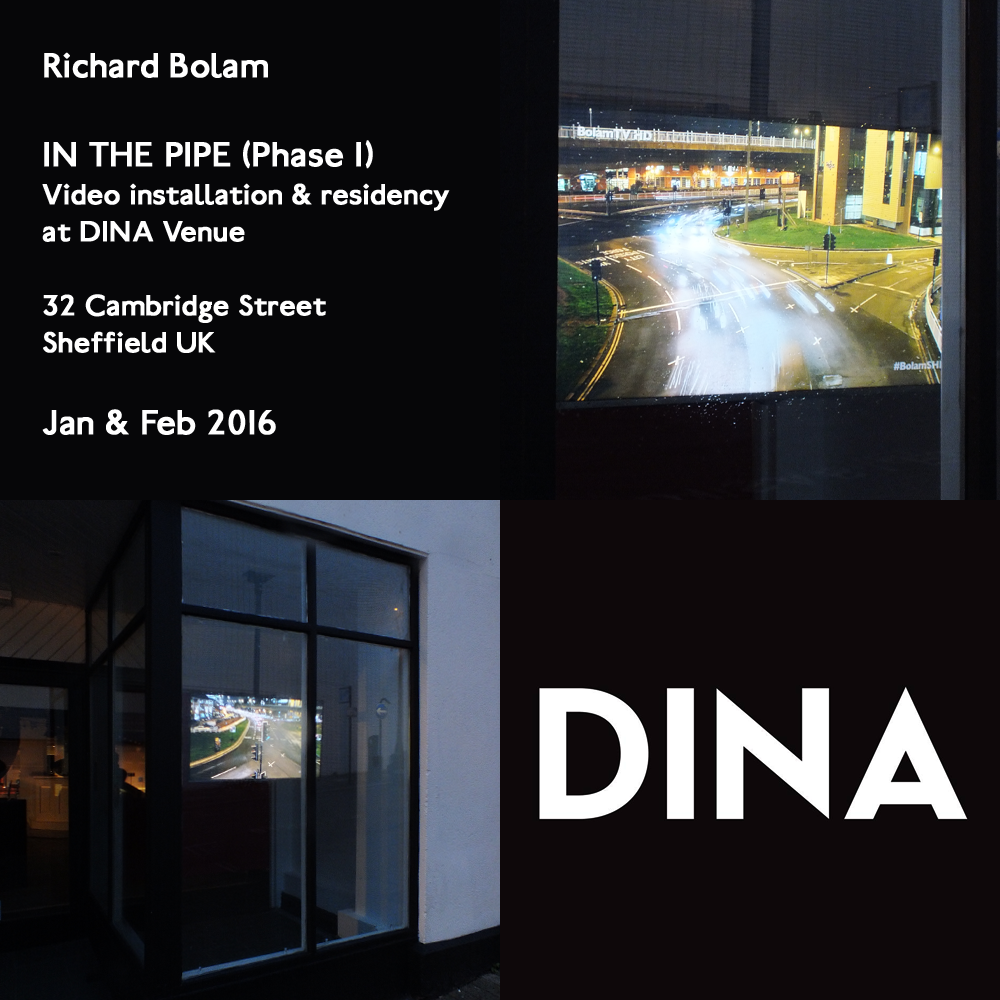 In Richard's own words:

'Heterotopias' - Foucault's Description of 'Other' Places

"Heterotopia follows the template established by the notions of utopia and dystopia. The prefix hetero- is from Ancient Greek ἕτερος (héteros, "other, another, different") and is combined with the Greek morphemes οὐ ("not") and τόπος ("place") and means "no-place". A utopia is an idea or an image that is not real but represents a perfected version of society, such as Thomas More's book or Le Corbusier's drawings. As Walter Russell Mead has written, "Utopia is a place where everything is good; dystopia is a place where everything is bad; heterotopia is where things are different — that is, a collection whose members have few or no intelligible connections with one another." From the Wikipedia article "Heterotopia (space)".

The term was created by Michel Foucault in his article "Of Other Spaces: Utopias and Heterotopias" 1967, as a way to describe places of difference, "espaces autres", "other spaces". A heterotopia can be real and/or unreal a place or space that appears to be one thing but is actually something else. A space of change and ambiguity. Possibly a space of control, deception, or subversion. Possibly a space of escape, and release. Think of a theatre stage, during a play the space transforms often - You are no longer in a theatre you are in a forest, in a city, on the sea, in a motel room. A mirror is a heterotopia - you can see a space that doesn't physically exist yet for all intents and purposes it is there. Facebook can be considered a heterotopia. It uses the language of space - groups, walls, pages - yet all of it is virtual, unreal.

Before I go further a brief warning about the term heterotopia - the term is not an "either/or", as in a didactic "that, is a heterotopia" versus a "no, it's not" set of statements. Foucault leaves the term open in its bounds. If you can imagine a space, of whatever kind, as being a heterotopia, then essentially it is one. I would also suggest to not get too obsessed by the exoticsm of the term heterotopia, I find using "other space" when getting bogged down in the philosophical use of language helps free up the topic immensely.

Foucault develops his idea by advancing 6 principles of heterotopia. (The following list is a reconfiguration of the points in the Wikipedia article as after reading the original Foucault essay I found the list to be at fault. Also, with Foucault himself I have a problem. Though he lists 6 principles it is difficult to discern whether only one principle needs to apply or if all six do in some way to define something as a heterotopia, I'm going with the 'one principle' view. If more principles relate then all the better.)

For me, all of this gets me thinking about mundane spaces in the everyday. What urban/suburban spaces have the possibility to become heterotopic "other spaces"? Abandoned factories, car parks, bus stops, empty streets, closed shops. In what way do these spaces fit with Foucault's principles?

(Having written all of this there is a side of me that is wondering if this is all a load of deliberate intellectual bull on Foucault's behalf. *ponder ponder* Is this one huge Foucault mindgame?)

Hetherington, K. (1997) "The Badlands of Modernity: Heterotopia and Social Ordering"

Way back in 1995 I worked as an assistant in a general store ("Gene's") opposite Bramall Lane football ground. During still periods I would gaze over the local Star newspaper. In one issue there was a pamphlet advertised 'Inner City Round Walk of Sheffield: A 6 part exploration of urban Sheffield by Terence Howard'. I sent off for it and still 20 years later I am following its routes.

I want to call it a ''Not' The Sheffield Round Walk' (a well known city walk which takes in Sheffield's green spaces). It's a great walk of urban and suburban Sheffield which takes you around the city to look at and compare architecture with environment and hopefully provides an understanding of Sheffield history and past economies. I've completed it several times with my partner and seeing the shift in cityscape over the past 2 decades has been fascinating and at times disturbing as the industrial 20th century city changes as it tries to deal with the needs and impositions of the 21st century.

‘Inner City Round Walk of Sheffield’ (1996).
A 6 part exploration of urban Sheffield by Terence Howard.
ISBN: 0952293412
Illustrations by Dan Sumption and Gill Howard.

(Click on the images to see them in better detail.)

Walking In And Around Sheffield - Sheffield City Council Links, Info and Resources

I have taken the excellent following information from the Sheffield Council website's "Walking in Sheffield" page. I am hugely surprised by just how much comprehensive information is available. Time to get the walking boots on.

In this first blog I aim to introduce some of the books that I have read as I developed my new body of work. They may be of interest and they may give some extra insight into what I do and why I focus on it.

'Edgelands' are the spaces that are in-between and on the edge. Places that are and have been ignored, yet all of us pass through, possibly on a daily basis. Rather than see me wax lyrically about this book do watch this following video of the two authors describing their intent in the creation of this wonderful work.


Read an edited extract of the book on the Independent website here.

A great review of this book written by geographer and environment campaigner Marion Shoard can be read here. Marion Shoard is credited with creating the term 'edgeland' in the book "Remaking the Landscape: The Changing Face of Britain" edited by Dame Jennifer Jenkins. The essay has kindly been put online to read here. Listen to Marion Shoard giving a short talk about her thoughts on edgelands here.

I came across this book when looking for writing about cities going through huge moments of change. The title alone had me hooked.

An incredibly dense book by French anthropologist Marc Augé. I have to confess that I found this incredibly hard going and some parts impenetrable. (I have seen some online comments suggest that there is a problem caused by a poor translation from the original French text.)

This 2008 video by Jon Stam, has selected quotes by Rem Koolhaas and Marc Augé concerning non-places.


Marc Augé presents his lecture "Architecture and non-places" in English to students at the Melbourne University in this 2013 video.

This essay was written by Dickens at a time when he was suffering greatly from insomnia. For him a way to deal with his frustration was by wandering the streets of London until he became weary. His wanderings were often varied and quite far. "Night Walks" is based on these rambles through the capital's moonlit streets. It's fascinating to read what closely amounts to a 'stream of consciousness' approach to writing describing the Victorian London he moved within. He writes about homelessness, drunkenness, and other vices. One bit that moved me hugely was his crossing the path of a hungry stray dog and his interaction with it. You will need to get hold of a copy to see what I mean as the moment he describes is incredibly vivid and tangible.

As an aside I have seen Victoria Woolf's "Street Haunting: A London Adventure" being used as a comparison with Dicken's essay.

I stumbled across this book on Wikipedia during an internet search exploring thoughts and ideas about moments described as sublime. Art theorist and historian James Elkins in his essay 'Against the Sublime' argues that the contemporary understanding of the sublime is too wrapped up in relativism and bound to subjective experience and in turn open to too much interpretation that the term becomes unintelligible.

I disagree (surprise) and this is the purpose of Tsang Lap Chuen text to propose an idea of a relativistic sublime which is about reaching limits of experience - life-limits. So the sublime moment is not rooted in what is observed but in the individual reaching their limits and the awe that is then provoked on having reached that limit. The limit can be abstract/conceptual as well as physical/experiential.

In the book he describes the history of ideas underlining the sublime, and establishes 3 types of sublime experience.

1) The sublime of the mountain top - an upper limit, an affirmative mode - a conquering euphoric sublime. Examples - experiencing the majesty of Mount Everest and having climbed it, the Grand Canyon. (The 'Overview Effect'?).
(p.41)

2) The sublime born of being safe whilst being witness to possible destruction - a lower limit, a preservative mode - an abject sublime.
Examples - a tract of vast uninhabited nature, a neglected graveyard, being on the edge of a precipitous cliff.
(p.41)

3) The sublime born in the familiar, mundane and everyday being transformed into something other - an equilibrium, an appreciative mode - an uncanny sublime. Examples - a swallow's eyes, the fall of leaves in autumn.
(p.42)

It is the third sublime that I am specifically interested in.