I'm embarrassed to say I have very little knowledge about the painter John Atkinson Grimshaw. Though I have seen odd pieces of his work before it's only been within the past 2 years that I've begun to actively look at it. 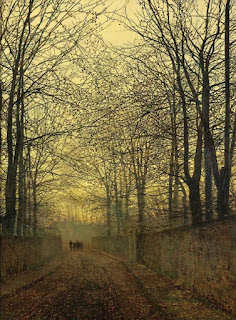 
John Atkinson Grimshaw was born 6 September 1836 in Leeds. In 1856 he married his cousin Frances Hubbard (1835–1917). In 1861, at the age of 24, to the dismay of his parents, he left his job as a clerk for the Great Northern Railway to become a painter. He first exhibited in 1862, mostly paintings of birds, fruit and blossom, under the patronage of the Leeds Philosophical and Literary Society. He became successful in the 1870s and rented a second home in Scarborough, which became a favourite subject...Grimshaw's primary influence was the Pre-Raphaelites ... In the 1880s, Grimshaw maintained a London studio in Chelsea, not far from the studio of James Abbott McNeill Whistler. After visiting Grimshaw, Whistler remarked that  "I considered myself the inventor of Nocturnes until I saw Grimmy's moonlit pictures".

During the 1870's when Atkinson Grimshaw lived in London he worked under the influence of James Tissot and was associated with the "art for art's sake" Aesthetic Movement  (other notable associates Aubrey Beardsley, Oscar Wilde) whose aims were to support the emphasis of aesthetic values more than social-political themes for literature, fine art, music and other arts. This meant that Art from this particular movement focused more on being beautiful rather than having any deeper meaning. There is very little social comment which takes place within his work. It can appear that he is looking at his world with quite an alienated dispassionate eye.

I don't want to deconstruct Atkinson Grimshaw's work in this blog. merely to provide a very brief introduction and present some examples that I find extremely engaging and hope that you will do too 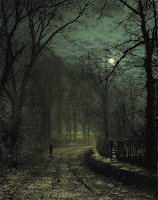