James Abbott McNeill Whistler (1834–1903) is a painter whose work has had a huge impact and followed me all the way through my painting career. During my studies in the early 1990's I was often able to visit the Tate Gallery (Tate Britain). I always remember being swept by the sensation of seeing large art pieces screaming for attention, all wanting to convince, shock, and/or entertain to a point of being overwhelming. However, there was always one painting on display which rather than existing on the large monumental scale existed in the relatively small. Whistler's 'Nocturne: Blue and Silver - Cremorne Lights' of 1872. It did not shout for attention it was not aiming to entertain. It was a painting whose aims included contemplation but also had an undefinable something else. A painting that was avowedly introverted. 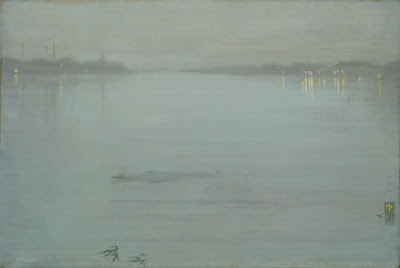 
The summary that accompanies the painting on the Tate website (link) -


Whistler's aim in this picture, as in all his Nocturnes, is to convey a sense of the beauty and tranquility of the Thames by night. The epithet 'nocturne' was first suggested by Frederick Leyland, since it conveys the sense of a night scene, but also has musical associations. The expression was quickly adopted by Whistler, who later explained,

By using the word 'nocturne' I wished to indicate an artistic interest alone, divesting the picture of any outside anecdotal interest which might have been otherwise attached to it. A nocturne is an arrangement of line, form and colour first' (quoted in Dorment and MacDonald, p.122).

The composition of this work, with empty foreground and high horizon, relates closely to Nocturne in Blue and Silver - Chelsea (Tate T01571) of the previous year. The view is from Battersea Bridge, looking upriver towards Battersea on the left and the lights of the Cremorne Pleasure Gardens on the right. Whistler preferred the calm of the river at night to the noise and bustle of the Thames by day. With would set off in a rowing boat at twilight and sometimes remain on the river all night, sketching and memorising the scene. He never painted his Nocturnes on the spot, but rather from memory in his studio, employing a special material devised for painting swiftly in oils. He thinned his paint with copal, turpentine and linseed oil, creating what he called a 'sauce', which he applied in thin, transparent layers, wiping it away until he was satisfied.

This particular scene is painted over a composition of four or more robed figures. Whistler presumably rubbed down the figure composition before adding a thin layer of pinkish grey paint, with which he worked out the main features of the river scene. The expanse of blue sky and water, creating a phosphorescent surface right across the canvas, enhances the mood of peace and tranquility. The orange lights of the pleasure gardens twinkle in the distance, adding to the dreamlike atmosphere. The reeds and raft in the foreground are barely indicated, with deft, calligraphic strokes of paint. The influence of Japanese art is evident here, and also in the restricted palette, the economy of line and Whistler's characteristic butterfly signature on the right.

Frederick Leyland's suggestion of the nocturne name to Whistler was rooted in Chopin's series of Nocturne's between 1827 and 1846.

Chopin - The 21 Nocturnes as played by Claudio Arrau 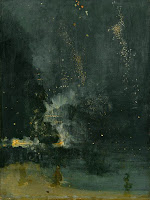