Video - BBC Ideas - What Is Hauntology? And Why Is It All Around Us?

'Hauntology' is an open ended term coined by the philosopher Jacques Derrida in the early 1990's in his book 'Spectres of Marx' (1993). Created as a portmanteau of the words 'haunting' and 'ontology' [the philosophical study of being] producing a word to describe the study of a spectral, ghostly, version of being - "the figure of the ghost as that which is neither present, nor absent, neither dead nor alive."

Over the past decade the term has gained huge relevance to a number of art forms and cultural debates. The cultural theorist Mark Fisher in the 2000's, through his K-punk website developed the boundaries of the word for it to become a poetic description of a yearning for the lost futures that our collective pasts once promised but no longer hold to be true. A reaction for some that a future of utopian possibility has been cancelled.

Watch the following BBC video by Richard Littler (of Scarfolk fame) to gain further insight into the term. 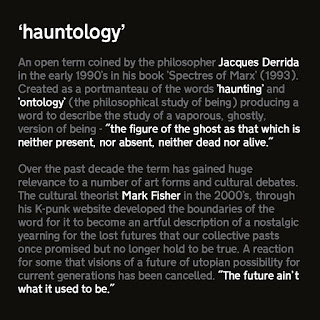